When summer rolls around you need a little heartfelt, feel-good music to usher in the warm weather and I need music on iPhone to listen to as skip and twirl through NYC on my Saturday afternoon adventures. What is my pre-summer music of choice, you ask? Ben Rector’s newest album Something Like This, of course!

On Thursday night I was heading over to the BBC upfront party for work and ran into my friend Danielle on the way out. Danielle told me she was heading to the NeedToBreathe concert that evening at Webster Hall. I’m a big NeedToBreathe fan, so I made an impulsive decision to ditch the BBC party early and go to the concert. For the first time in my life I scalped a ticket off a man on the street, then walked into the venue to hear a familiar voice-not Bear Rineheart’s as I had expected-sing the last phrase of a song, “let the good time roll toniiiiight!” To my delight, it was BEN RECTOR! Obviously, I was out of the loop. I had no idea he was opening the show and I couldn’t be more excited. Ben Rector AND NeedToBreathe? Stop it! 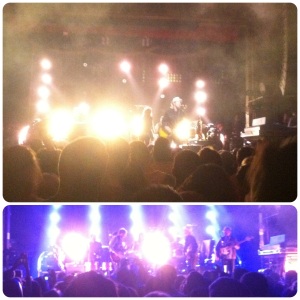 Back in 2006 when the MySpace era was dwindling down, I fell in love with a song by Dave Barnes called Someday Sarah for obvious reasons (who doesn’t like a song that features their name?).  I clicked around on Dave’s page and found a little artist by the name of Ben Rector and his song “Conversation.” Two years later (2008), I discovered that Ben had released a free sampler on NoiseTrade and there was no going back; I was hooked.

Maybe I’m not supposed to say this, but Ben is adorable and his music (just like Dave Barnes) makes a girl’s heart melt like an ice-cube in the summer sun. Seriously. I don’t know if there is a girl in the world who doesn’t want to hear Ben sing to her: “Baby, I am never gonna let you go/Baby, I am telling everyone I know/Though the storm may come or the wind may blow/Baby, I am never gonna let you go. ” in a melodic, piano-based pop-ballad.

If you’re like me, and you can’t get enough Ben Rector, listen to these two tracks below and click over to Amazon and buy all of his albums right now!

^Song For the Suburbs